President Yoweri Museveni has said the media is part of the emergence services that must be allowed to continue working, as the rest of the country is put under lockdown.

Museveni was speaking Tuesday night to the nation to clarify some of the guidelines he issued on Monday in a bid to contain the spread of the highly contagious Coronavirus.

“Media is a service that should continue like electricity, like water, like medical, they are powerful, so their vehicles will also get stickers. That will be handled by the Ministry of Transport,” Museveni said.

He equally said people who work in banks should also be allowed to drive to work although they should be alone in the car.

Some bank employees have had their cars impounded by security officers who were deployed on the roads to enforce the orders.

“For the customers I wouldn’t encourage driving. Either walk to the bank or use mobile money, but for the workers they should get stickers but they should move alone in the car. The three passengers [directive] was abused,” Museveni said.

For the diplomats he said they should also be allowed to move in their diplomatic vehicles specifically either to go to the market for food supplies or to hospitals for medication.

On the inconvenience of having to call Resident District Commissioners for waivers to transport the sick and expectant mothers to hospitals using private cars, Museveni said, the RDCs must deploy dedicated officers who must be on duty for 24 hours.

He said if they allow everybody to issue waivers to use private means for transport, it will cause chaos. Many people across the country had complained that they were calling RDCs for special permission to travel using private means but many were not picking their calls.

Museveni reiterated his massage to all government employees at the district to surrender their cars to the District Health Officers to be used for emergencies.

“Public servants who refuse to handover their cars can just be arrested…they are idiots, they are drunk with power,” Museveni said.

The president also ordered for the release of cars that were impounded yesterday as a result of his order halting the movement of all private vehicles by 10pm.

“I was aware that there could be some confusion and I did it deliberately, we had to surprise you to stay where you are. We didn’t want to give you time to run around… So, I direct the police that if you impounded any vehicles yesterday because of the ambush which I organized, I give them amnesty but they shouldn’t go anywhere,” Museveni said. 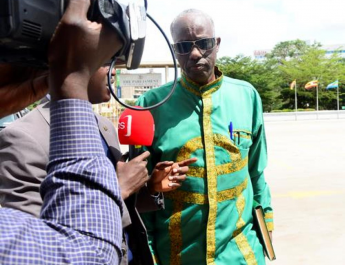