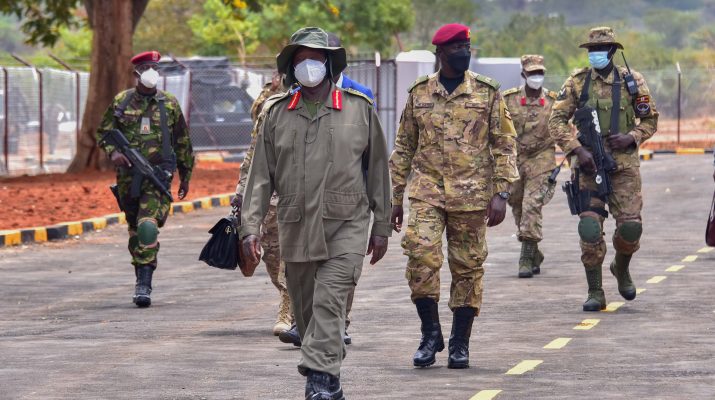 Kampala-H.E Gen. Yoweri Museveni who is also the Commander in Chief (C-I-C) of Uganda Peoples Defence Forces (UPDF) has said that the Air Force has played a big role in the fight against the ADF rebels.

Gen. Museveni made the remarks today at the Air Command and Leadership Training Institute in Nakasongola District where he presented a lecture of opportunity to 62 air force officers who have completed a Squadron Officers Course intake Number one that lasted 28 weeks.

The President also commissioned the Institute and passed out the officers.

“The supersonic planes played a big role in eliminating the ADF rebels.

The concept of combined arms is the good way to go.

The combined arms move through the use of both air force and artillery is crucial in winning a fight, ” Museveni said.

He observed that UPDF is providing security so that the society gets time to work for change.

The President noted the four principles that must be observed towards attaining prosperity of the people. He noted that the first principle to promote Patriotism as a prerequisite towards getting prosperity.

He said that it is every citizen’s duty to promote Patriotism in the country.

He also informed the students that there is need to promote Pan-Africanism.

He revealed that through the practice of Pan-Africanism, Uganda has the opportunity of securing a market for its products.

The other principle, he added, is Socio- economic transformation.

He reminded them that society must produce skilled working people.

He said that if they are educated, they will become new people.

He stressed that Uganda needs a new society of educated people who are generating income.

The President said never again should Africa colonised and be compelled to lag behind in human development.

The President warned that the practice of subsistence farming or working only for the stomach must stop. He stressed that people must strive to have both food and income security. He said that it is vital to conduct ventures that generate income through being calculative.

The other principle is Democracy.

H.E Museveni observed that Africa lagged behind due to failure to invent machines.

He noted that for a period of 300 years, the African continent lost people through slave trade. He reminded the students that Europe continued progressing after the invention of machines that covered various sectors such as the printing press, the steam engine and the railway. He noted that Africa only started its resistance upon the launch of the African National Congress (ANC) in South Africa in 1912.

The President criticized people who claim that a tribe is more important that the country.

&quot;We must work for Patriotism,&quot; he stressed. Later in the day, the President addressed the squadron officers and guests who attended the passing out ceremony. He witnessed an air force demonstration of their operations against hostile forces.

He paid tribute to UPDF for the job well done when it launched an attack on the ADF rebels in Eastern DR Congo on November 30, 2021.

&quot;On the first day, we destroyed them by using the air force and long range artillery. Later, the infantry was spread out. The rebels are now in trouble because of the correct use of the force,&quot; he said.

He, therefore, noted that it is good to minimise costs as has been demonstrated by training within the country. He also briefed the trainees on his experiences during the liberation struggle in Uganda in the 1970s, noting that the concept of combined arms is very crucial.

The President noted that air force pilots were currently earning Shs4million per month and said that this package was not sufficient. He assured them that the pay would be revised upwards as soon as resources are available.

The President Museveni pledged to build the road leading to the Institute, the runway, and infrastructure within the complex. He said that the

Government was fully committed to provide more facilities such as buildings for classes, dormitories, libraries and computer labs in order to improve in service delivery.

He commended the army leadership for the good job they have done.

The President commended the best performers for their achievements.

The Minister of Defence, Hon. Vincent Ssempijja saluted President Museveni for the lecture. The minister said Museveni was exemplary and that Uganda was gifted to have him. Ssempijja said the wish is for Uganda to have the strongest air force in the region.

The Deputy Chief of Defence Forces (DCDF), Lt. Gen. Peter Elwelu, said that UPDF has survived because of President Museveni’s leadership. He said that they is need to have a combined forces training. Lt. Gen. Elwelu warned the students over the dangers of Covid-19.

The UPDF Air Force Commander, Lt. Gen. Charles Lutaaya, said that the Uganda Air Force Academy was launched in 2009. He requested the President for more training slots for the Air Force.

The Commandant of the Institute, Col. James Muhwezi, saluted President Museveni for establishing the Institute. He said that the facility has got three schools in the same campus. 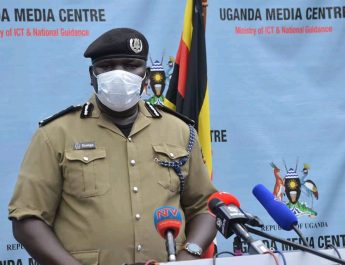 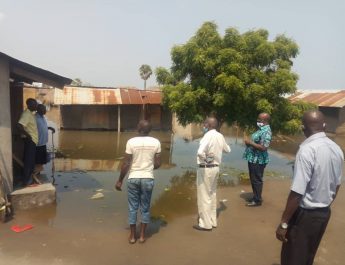