Soccer lovers in Hoima district have criticized the LCV Chairperson Kadir Kirungi for frustrating the construction of 6.5 billion shillings mini-stadium.

Karungi is accused of failing to hand over the Hoima Boma ground land title to Hoima Municipal Council.

Hoima Municipal Council and Hoima District local government are currently locked in a dispute of Hoima Boma grounds. The dispute stemmed from the failure by the district to surrender the title for the land hosting the ground.

Recently the Municipal authorities demanded that the district hands over the title, to pave way for the construction of the mini-stadium funded under phase three of the Uganda Support to Municipal Infrastructure Development (USMID) program. However, the district has adamantly declined to surrender the Title frustrating the whole project.

William Asiimwe, a supporter of Kitara FC based in Hoima town questions the Chairman’s interest in the land title. He wants the district Chairperson investigated for frustrating the World Bank project.

Twaha Musa another football fan says failure by the district Chairperson to surrender the title will negatively impact on the sports fraternity given the sorry state of the Hoima Boma grounds.

He wants all concerned stakeholders should compel Kirungi to unconditionally release the title.

Moses Atuha, the Former Vice-Chairperson Hoima district football Association argues that the chairperson’s action spells doom for the development of sports talent in the region.

Kirungi says the Municipal Council should sign a memorandum of Understanding with the district on how the land can be utilized.

According to Kirungi, there are top officials at the Municipality who illegally acquired plots around Hoima Boma grounds without the consent of the district and are now pushing the district to surrender the land title so that they can develop their plots.

The Hoima Boma ground that seats on a four-acre piece of land is located opposite the Hoima Referral Hospital in Hoima town.

It is the only place for hosting sporting activities and public functions across the district.

URN has reliably established that the ground’s land title was processed by the district before Hoima town council was elevated to a municipality in 2010. 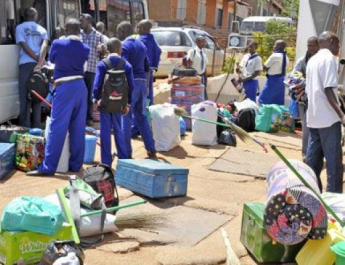