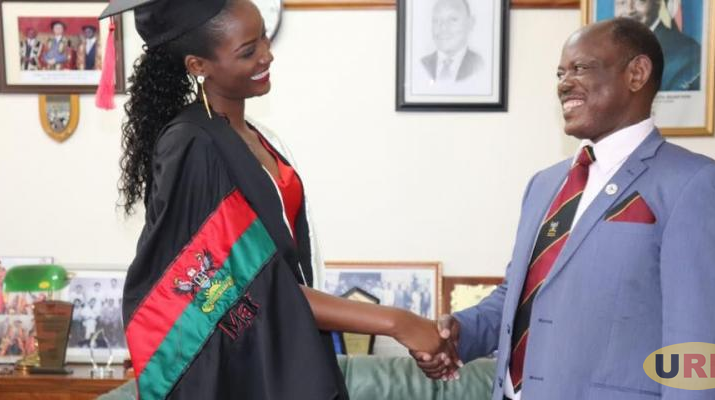 According to Dr Robert Ayine, the Senior Higher Education Officer of the NCHE, the council had contacted the complainant David Musiri, who he says had lost interest in the matter.

David Musiri, then, a second-year student of BCOM (External) at Makerere University petitioned the Director of the Criminal Investigations Directorate (CID), Grace Akullo and the NCHE to investigate the alleged illegal activities of Makerere Vice-Chancellor Professor Barnabas Nawangwe and Professor Wasswa Balunywa, the Principal of Makerere University Business School (MUBS).

Musiri wanted the two officials to be investigated for allegedly issuing fake degrees, diverting money meant for bursaries and corruption among other allegations.

He at the time claimed that Abenakyo did not complete all the legal requirements for the award of Bachelor’s Degree, yet she was allowed to “pretend otherwise on 18th January 2018 with the blessing and enthusiastic handshake of our enigmatic Vice-Chancellor”.

On February 7, 2019, it was reported that Abenakyo miraculously graduated with a second class upper Bachelor’s degree in Business Computing, even with a retake in the “Financial Management” course unit. Her retake had been scheduled for September 1, 2018, a time she was away attending the beauty contest.

It was established from sources in the office of Makerere University Academic Registrar that Abenakyo did not fulfil the requirements for the graduation. She was, however “assisted” to graduate through granting her a “Special Examination”, outside the Makerere Academic Policy guidelines.

And even when a follow-up was made November 26th 2019, there was no feedback except a brief email sent out to Isaac Ssemakadde, Musiri’s lawyer explaining that the Council had contacted his client and had lost interest in the matter.

“We have since got in touch with Mr Musiri David on his cell phone who has expressed that he is no longer interested in pursuing this matter any further and would, therefore, wish that we do not investigate it as earlier planned,” says Dr Ayine.

He adds; “Let us know if this is the position agreed between you and your client.”

But Ssemakadde say he was not surprised, that after such a long time the student’s choices had fundamentally changed.

He notes that as the regulator of higher education, NCHE’s mandate to investigate wrongdoing that brings Ugandan education into disrepute is not derived from the consent of wishy-washy complainants like that of David Musiri but simply an obligation as a sector watchdog.

“The question you must ask yourself is whether the National Council would be justified not to investigate merely because Musiri expressed “the wish that you don’t investigate as earlier planned.” Of course, that would be the wrong decision legally, morally and ethically,” Ssemakadde discloses.

Ssemakadde contends that he disagrees with the position of the National Council and wants the allegations into fake degree scam investigated to further protect the integrity of Makerere University academic awards.

“… If your excuse is that the National Council needs a citizen complaint to move forward with the investigation, I hereby instruct you to move forward “with my consent”. I want to see this matter investigated speedily and fairly to its full and logical conclusion,” Counsel Ssemakadde says in an email sent to NCHE.