Police in Kyakwanzi has arrested the suspect who has been in hiding after he allegedly clobbered to death of a one Omuhereza Kisakye alias Peter aged 21, a Boda-Boda cyclist attached to Nyamarunda stage early last month.

According to police, they have in custody Kizito Mwesige who on the night of 3rd last month in Kibogo B village killed Omuhereza Kisakye taking off with his motorcycle Reg. No. UER 639E.

The Kibaale DPC David Otabong yesterday told our reporters that Kizito Mwesige was arrested by the Kyankwanzi police yesterday while in Bukwiri in Kwankwanzi district with the Bajaj Motorcycle of the late Kisakye now a month after police launched manhunt.

Otabong says that Mwesige will be transferred from Kyankwanzi to Kibaale Police Station in the shortest time for the law to take its course.

Man on the run after Butchering his estranged Wife in Kibaale 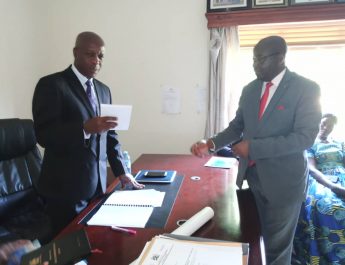